Hacks to Flacks: the Myths and Facts about transitioning from Journalism to PR 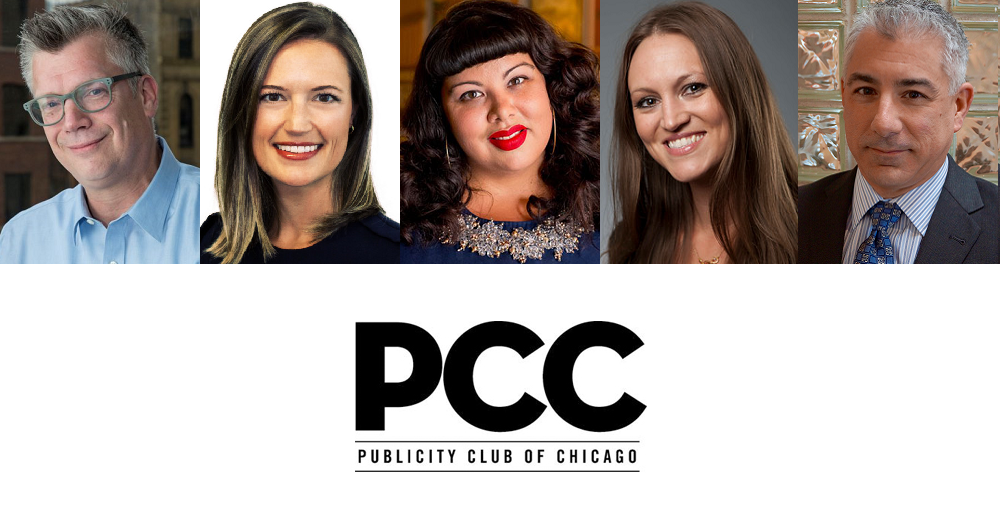 Have you been thinking about making a transition inside the PR and communications fields? Join us for "Hacks to Flacks" where you will hear from individuals who made a transition from journalism all the way to the 'dark side'.  Topics will include:

We hope you can join us for this special breakfast program.

Eric Benderoff is senior vice president of brand solutions at Burson Cohn & Wolf in Chicago. He is known for high-stakes media relations, crisis management and journalistic leadership with expertise in content development, message strategy, editorial writing and brand awareness. He is a media strategist for several key BCW clients—including Accenture, Bank of America and Ford—as well one of the agency’s preferred executive media trainers.

Benderoff is a former journalist with two decades of top-tier newsroom experience and brings a working understanding of modern news gathering to his communications strategies. Before joining BCW, Benderoff worked at the Chicago Tribune as a business editor, columnist, reporter and feature writer specializing in the intersection of technology and culture.

As the Tribune’s personal technology columnist, Benderoff’s work was distributed to national newspapers and countless consumer-focused websites. He discussed technology trends each week on Chicago's top morning drive radio show, hosted a weekend cable TV segment and appeared regularly on Chicago public television. At the Chicago Sun-Times, he was the business editor responsible for the development and introduction of the paper's daily technology coverage. For several years, he served as the paper’s real estate editor and for three weeks, its fashion editor.

Benderoff serves on the school’s Professional Advisory Board for the Public Relations and Advertising department and is the former chairman of his Local School Council for Chicago Public Schools. He has received a number of PR and journalism awards both individually and as part of BCW client teams.

Lauren DiSpirito Booth is a Senior Account Supervisor at Public Communications Inc. (PCI) in Chicago, where she develops and executes strategic programs on behalf of conservation and nonprofit clients. Whether counseling a client through a crisis or creating a strategy to reposition them in the marketplace, Lauren keeps a close eye on the details that matter most to clients and is diligent in helping them achieve their communications goals.

Lauren manages the day-to-day activities and provides strategic counsel for a diverse portfolio of clients, including ZooTampa at Lowry Park, Chimp Haven and The Marine Mammal Center. Her storytelling expertise and counsel on video strategies has elevated PCI’s implementation of video into more client programs.

As a former journalist, Lauren has reported and anchored for broadcast news stations around the country. At CBS Denver (KCNC-TV) she was responsible for managing the station’s northern news bureau before moving on to covering live breaking news daily for the early morning and late evening newscasts. In Florida and Georgia, she was recognized for her ability to develop sources and deliver exclusive reporting on crime, environment and education stories. Lauren began her career as an assignment editor at NBC Philadelphia (WCAU-TV) where she facilitated coverage of the 2008 presidential election.

Lauren has a Bachelor of Arts in communication from Villanova University and studied integrated marketing at the University of Chicago. Lauren grew up in New Jersey and enjoys living in Chicago and exploring the Midwest with her husband, Ryan.

Monique Garcia serves as Vice President of Public and Media Relations for Mac Strategies Group. In this role, she oversees operations in Springfield and provides strategic vision and planning to ensure clients reach their goals inside the Statehouse and beyond. Recognized as one of the “best state capitol reporters in America” by the Washington Post, Garcia offers an invaluable blend of skills to successfully execute a variety of media and public relations campaigns.

Garcia brings a wealth of media experience, having worked as a journalist at the Chicago Tribune for more than a decade, most recently as the Tribune's Statehouse Bureau Chief. Her expertise covering Illinois government and politics eventually brought her from Chicago to Springfield, where she helped direct coverage as the Tribune's legislative correspondent. During her time at the Tribune, Garcia developed a unique reputation for helping readers digest intensely complex information. From the impeachment of a governor to the launch of then U.S Senator Barack Obama's presidential campaign and his subsequent visits to Illinois, she has covered a number of high profile issues, including several congressional races and historic legislative issues.

Most notably, Monique delved into the state's historic budget stalemate and explored its impact on taxpayers and those who do business with the state. She also examined Illinois' pension crisis and efforts to push for change. In acknowledgment of her quality reporting, Garcia and her team were recognized by the Chicago Journalists Association for their efforts to provide daily, microscopic coverage of the 2014 governor's race.

Monique Garcia earned her bachelor's degree in journalism from Southern Illinois University Carbondale and her master's degree in public affairs reporting from the University of Illinois at Springfield. She serves on the Board of Directors of the Boys and Girls Clubs of Central Illinois and is a member of the Illinois Council on Women and Girls. She resides in Springfield.

Maureen Lynch Vogel is a media and communications professional with 14 years of expertise in journalism and public relations. She joined the National Safety Council in 2011 and was instrumental in creating its media department. She currently leads all media relations activities, develops external messaging and conducts spokesperson training for subject matter experts.

Maureen oversees the NSC Studio which has full broadcast capabilities and is a primary spokesperson for the Council. She leads the development process for external content, particularly around advocacy issues including transportation and home and community safety. She is a key member of the NSC public education campaign around opioid misuse and overdose prevention, Stop Everyday Killers, winning wide-ranging recognition for public relations excellence from such renowned award programs as the Clios, the Silver Anvils, Cannes and the ADDYs.

Throughout her career Maureen has leveraged earned media to help the Council expand its visibility and reach, and has developed respected relationships with national and local media editors and producers across the country. Since joining the NSC public relations team, she has helped ensure NSC regularly is featured in national news segments about safety at work, on the road and in homes and communities.

Prior to joining the National Safety Council, Maureen was a nationally recognized sports journalist for daily newspapers in Michigan and Illinois. The Associated Press Sports Editors named Maureen’s investigative series on high school club volleyball one of the ten best projects of the year. She received the prestigious Sweepstakes Award for Editorial Excellence from the Illinois Associated Press Editor’s Association and was inducted into the Illinois Coaches Association Hall of Fame in 2011.

Maureen holds a Bachelor of Arts degree in journalism from Grand Valley State University in Grand Rapids, Michigan. She and her husband live in suburban Chicago.

Jim Webb is the operations director at Serafin & Associates, Inc., a Chicago-based public affairs communications firm that serves private and public sector clients in Illinois and around the country. Serafin provides strategic counsel, media relations, crisis planning/response and stakeholder relations for clients seeking to be good neighbors in the communities they serve and valued partners in the public arenas where they operate.

In a three-decade career as a Chicago-based reporter and editor, Jim touched many of the biggest stories at the intersection of public affairs and government in Illinois: Investigations and corruption trials of two former governors; historic elections for president, Senate, governor and Chicago mayor; man-made and natural disasters; criminal trials and Fortune 500 bankruptcies; the end of the death penalty; the changing of the guard at City Hall; and the dysfunction of state government.

Jim was the Chicago Tribune’s Illinois political editor from 2005-10, responsible for the newspaper’s coverage of state government, Cook County government and City Hall. From 2010-15 he led a government investigations team at the Tribune.

Prior to the Tribune, Jim was Chicago news editor for The Associated Press from 2000-05, where he was responsible for 24-7 coverage of Illinois. After joining the AP’s Chicago bureau in 1989 he worked with newspaper editors and broadcasters in every corner of the state as a reporter, editor and manager. From 1987-1989 he worked at AP bureaus in St. Louis, Louisville and Philadelphia. He holds a journalism degree from Bradley University and a master’s in Public Affairs Reporting from the University of Illinois-Springfield.